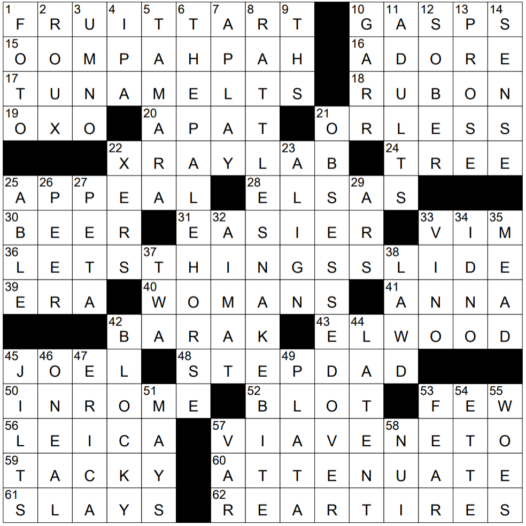 Constructed by: Meghan Morris
Edited by: Will Shortz

19 Kitchen brand whose name is an ambigram : OXO

22 Its employees might get under your skin : X-RAY LAB

Growth rings can be seen in a horizontal cross section of a tree trunk. These rings are caused by a change in the rate of growth of a tree that comes with the seasons, so the rings are more easily discerned in trees that grow in regions with marked seasonal changes.

43 One of the Blues Brothers : ELWOOD

45 One of the Coen brothers : JOEL

Via Veneto (actually “Via Vittorio Veneto”) is an upmarket street in Rome, and the address of many of the pricier hotels. It was made famous in Federico Fellini’s “La Dolce Vita”, and is still the home to Harry’s Bar and Café de Paris, which were both featured in the movie.

To attenuate is to reduce in intensity or effect, or to make thin or slender.

2 Component of three of the five French “mother sauces” : ROUX

A roux is a mixture of wheat flour and clarified butter (or other fat) cooked together until it can be used as a thickening agent.

“Mr. Mom” is a 1983 comedy written by John Hughes that stars Michael Keaton and the great Teri Garr. The movie is all about an engineer in the auto industry in Detroit who loses his job and then takes over the running of the household while his wife heads back to work. It’s funny stuff …

The 1994 movie “Reality Bites” was the directorial debut for actor Ben Stiller. Like many low-budget movies, things moved pretty quickly during shooting. It was filmed in just 42 days, on location in Austin and Houston, Texas.

There is a trio of letters R (ars) in the word “horrors”.

44 Not yet manifest : LATENT

Something is said to be latent if it is present, but not active.