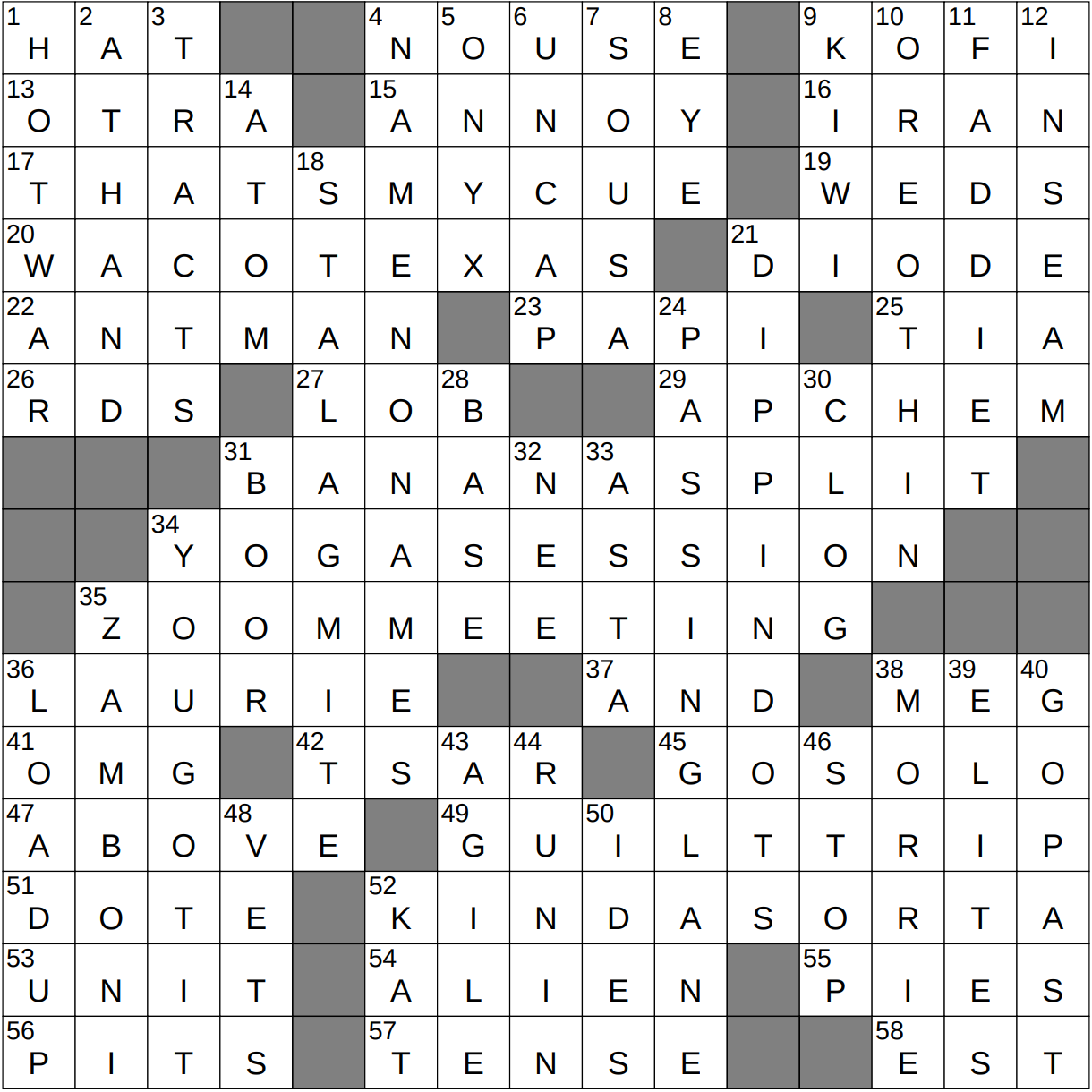 A paranoid person (“tin hat”) might wear a hat made of aluminum foil in the belief that it provides protection against mind-control and mind-reading.

16 Where polo was invented : IRAN

20 Southwestern city that produces most of the U.S.’s Snickers bars : WACO, TEXAS

The Texas city of Waco is named for the Wichita people known as the “Waco”, who occupied the area for thousands of years.

A light-emitting diode (LED) is a specialized form of semiconductor that when switched on releases photons (light). LEDs were used in early digital watches, and are getting more and more popular even though their use in electronic equipment is fading away. LEDs are used as replacements for the much less-efficient tungsten light bulbs. I replaced all of my tungsten Xmas lights many years ago and saved a lot on my electricity bill.

34 Time when it helps to be flexible : YOGA SESSION

Meg Ryan is the stage name of the actress Margaret Mary Hyra. Ryan’s big break came with the excellent 1989 movie “When Harry Met Sally …”, from which she went on to star in some of the most popular romantic comedies ever made.

Paul I was Tsar of Russia, and the only son of Peter III and Catherine the Great. Paul was on the throne for only five years, before being assassinated in a conspiracy that brought his son Alexander I to power.

“The pits” is an American slang term for something really bad, and has been in use since the early fifties. Apparently, “pits” is short for “armpits”.

John Philip Sousa was a composer and conductor from Washington, D.C. Sousa was well known for his patriotic marches and earned himself the nickname “The American March King”. He served as a member of the US Marine Band from 1868 to 1875, and after leaving the Marines learned to conduct and compose. One of the Sousa compositions that is well-known around the world is called “The Liberty Bell”, a tune used as the musical theme for BBC Television’s “Monty Python’s Flying Circus”. Sousa also wrote “Semper Fidelis”, which is the official march of the US Marine Corps.

8 Common symbol in a rebus : EYE

18 One growing up in a cave? : STALAGMITE

A stalactite is a mineral deposit that hangs from the roof of a cave, formed by continuous dripping of mineral-rich water. “Stalactite” comes from the Greek word “stalasso” meaning “to drip”. A stalagmite is a rock formation that rises from the floor of a cave as a result of mineral deposits dissolved in water dripping from the ceiling.

35 It resurfaces after 20 minutes : ZAMBONI

“Tuesdays with Morrie” is a novel by Mitch Albom, first published in 1997. The story is a work of nonfiction, telling the tale of sociologist Morrie Schwartz and his students, one of whom is the author Mitch Albom. Albom has frequent visits with his old professor when he discovers that Morrie is dying from ALS.

48 Does a background check on : VETS