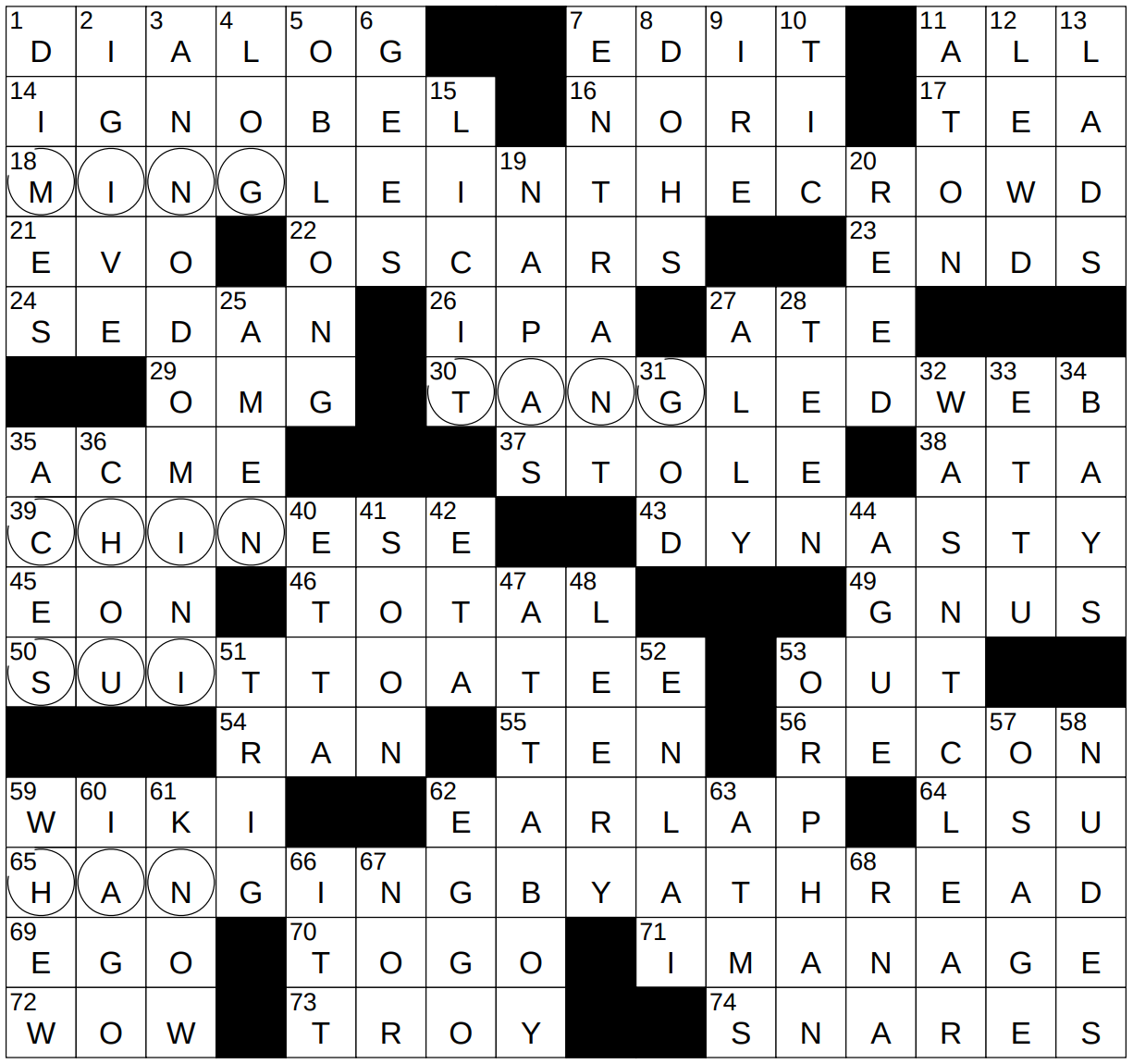 Themed answers each start with the name of a CHINESE DYNASTY:

The Ig Nobel Prize is a series of ten satirical awards presented annually since 1991. Despite their humorous nature, the awards do have some gravitas and are presented by actual Nobel laureates. The main thrust of the award is veiled criticism of trivial scientific research.

The name for the Chinese tea called “oolong” translates into English as “black dragon” or “dark dragon”.

The Ming Dynasty lasted in China from 1368 to 1644. The Ming Dynasty oversaw tremendous innovation in so many areas, including the manufacture of ceramics. In the late Ming period, a shift towards a market economy in China led to the export of porcelain on an unprecedented scale, perhaps explaining why we tend to hear more about Ming vases than we do about porcelain from any other Chinese dynasty.

The foodstuff that we call “hops” are actually the female flowers of the hop plant. The main use of hops is to add flavor to beer. The town in which I used to live here in California was once home to the largest hop farm in the world. Most of the harvested hops were exported all the way to the breweries of London, where they could fetch the best price.

Here’s one most commonly misattributed quotes from English literature:

Oh, what a tangled web we weave,
When first we practise to deceive!

39 With 43-Across, historical period found in each set of circled letters : CHINESE … (giving “CHIN”)

The Jin (also “Chin”) dynasty of 1115 to 1234 ruled much of modern-day, northeast China. The dynasty eventually fell to the Mongol Empire that was based in the north.

The Sui dynasty was founded in 581 CE by Emperor Wen of Sui. The dynasty was short-lived, and ended in 618 CE. It was followed by the Tang dynasty.

Out of office (OOO)

62 Feature of a deerstalker : EARLAP

Baton Rouge is the capital city of the state of Louisiana. The name “Baton Rouge” is French for “red stick” or “red staff”. The exact reason why such a name was given to the city isn’t really clear.

65 Surviving, but just barely : HANGING BY A THREAD (giving “HAN”)

The Han dynasty was the second imperial dynasty of China and lasted from 206 BC to 220 AD. It came after the Qin dynasty, and before the Three Kingdoms.

The story of the Wooden Horse of Troy is told in Virgil’s poem “The Aeneid”. According to the tale, the city of Troy finally fell to Greeks after a siege that had lasted for ten years. In a ruse, the Greeks sailed away in apparent defeat, leaving behind a large wooden horse. Inside the horse were hidden 30 crack soldiers. When the horse was dragged into the city as a victory trophy, the soldiers sneaked out and opened the city’s gates. The Greeks returned under cover of night and entered the open city.

“Fantastic Four” is a 2005 movie about the band of comic heroes made famous in Marvel Comics. The Fantastic Four are:

Nirvana was a rock band formed in Washington in 1987 by Kurt Cobain and Krist Novoselic. The band effectively disbanded in 1994 after Cobain committed suicide.

51 Class with angles, for short : TRIG

57 Tributary of the Missouri River : OSAGE

68 Basis for some vaccines : RNA