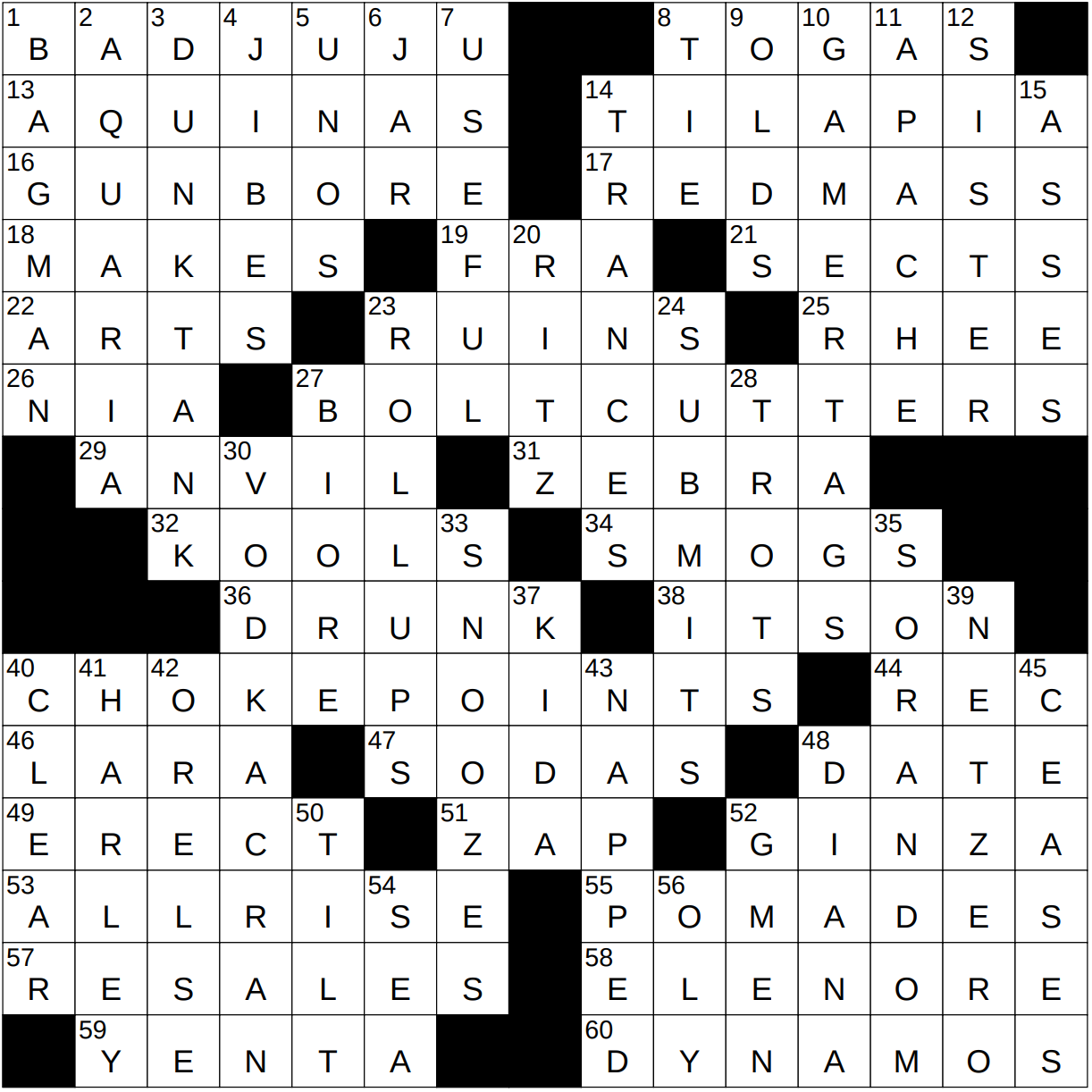 “Juju” is a term used by Europeans in days gone by to describe West-African religions. Today we use the term for things such as amulets and spells associated with those religions and also witchcraft.

The name “tilapia” is used for almost a hundred species of related fish, most of which are found in freshwater. Tilapia are found in many fish farms as they grow very quickly and are popular in restaurants.

31 Inspiration for some fashion lines? : ZEBRA

Kools cigarettes were introduced in 1933, and are still around today. The brand is marketed as being “smooth”, as the ingredient menthol numbs the mouth and dulls the taste of the tobacco.

Lara Lor-Van is the biological mother of Kal-El, and wife of scientist Jor-El. Kal-El is sent to Earth, where we would know him better as “Superman”.

Ginza is a district in Tokyo that is noted for its western shops, and especially the leading fashion stores.

“Aquarium” is a Latin word meaning “pertaining to water”, although in Latin the word only existed as a noun with the meaning “drinking place for cattle”. Before the use of the noun “aquarium” (plural “aquaria”) in the context of fish, a tank was sometimes referred to as a marine vivarium.

3 It’ll make a splash at a county fair : DUNK TANK

A dunk tank is a funfair attraction consisting of a large tank filled with water, over which a volunteer sits on a collapsing seat. Balls that are successfully thrown at a target cause the seat to collapse, and the unfortunate volunteer gets dunked.

9 Sharon with a Pulitzer for poetry : OLDS

Bioré is a skincare brand owned by the Kao Corporation of Tokyo.

48 Royal chronicled on “The Crown” : DIANA

Diana, Princess of Wales appeared on back-to-back issues of “Time” magazine in 1997. Both covers were occasioned by Princess Diana’s tragic death.

“The Crown” is a historical drama produced for Netflix that covers the life of British Queen Elizabeth II from her marriage to Philip, Duke of Edinburgh. For the first two seasons, Elizabeth is played by Claire Foy and Philip by Matt Smith. For the next two seasons, Olivia Colman and Tobias Menzies take over as Elizabeth and Philip. The show finishes up with Imelda Staunton and Jonathan Pryce in the roles.

The Olympia Brewing Company was founded in the town of Tumwater, Washington in 1896, by a German immigrant. Olympia (familiarly “Oly”) was acquired by Pabst in 1983.