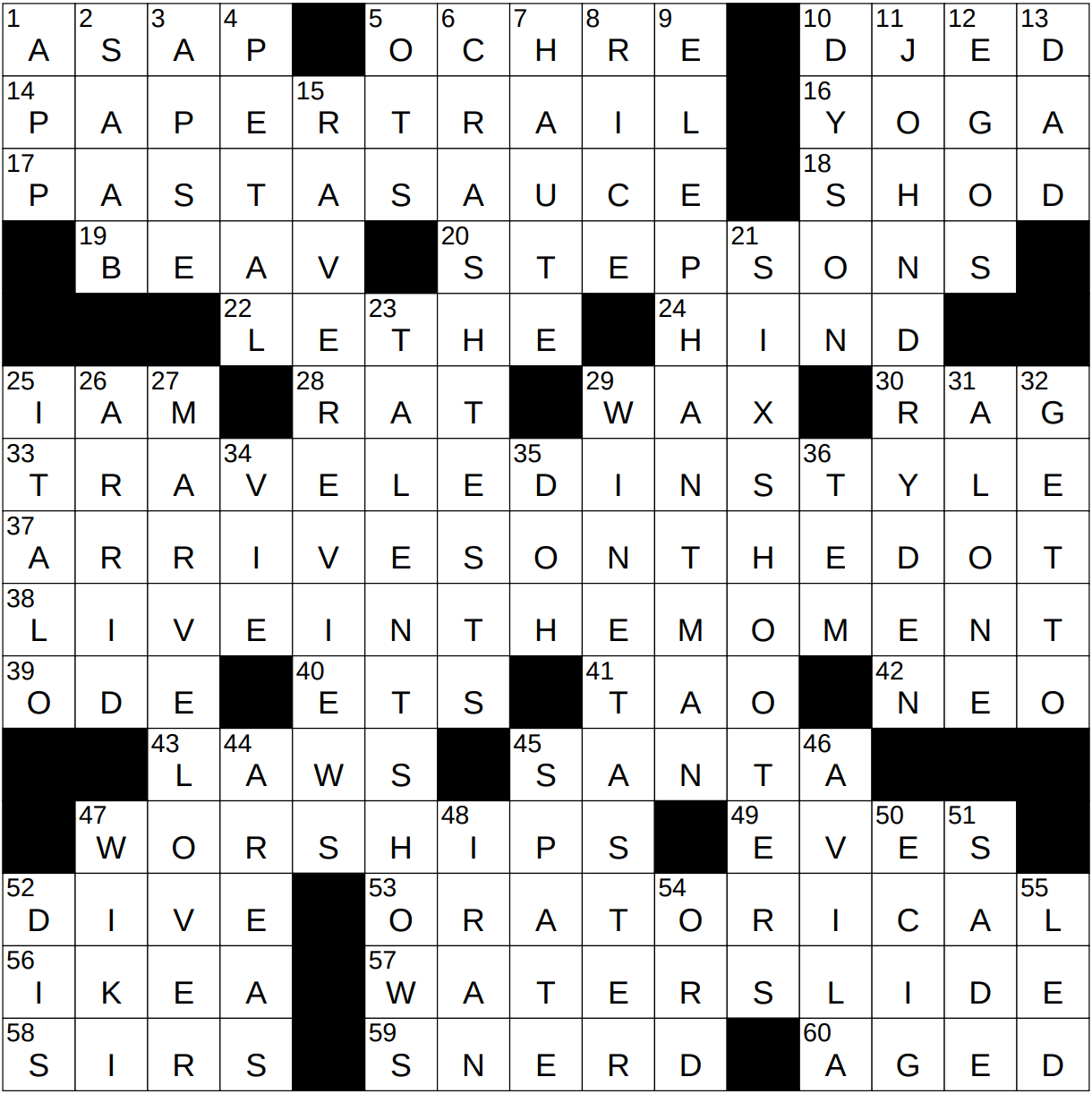 Ward Cleaver and his wife June were the parents of Wally Cleaver and his younger brother “The Beaver”. The four family members appeared in the fifties sitcom “Leave It to Beaver”.

“I Am America (and So Can You!)” is a satirical book published in 2007 by Stephen Colbert.

39 It traditionally starts with a strophe : ODE

In general terms, in poetry a strophe is a pair of stanzas with alternating form. So, a poem might be made up from a number of strophes, and twice that number of stanzas.

The word “cusp” comes from the Latin “cuspis” meaning “spear, point”. In the world of astrology, a cusp is an imaginary line separating two signs of the zodiac. For example, some whose birthday is between April 16 and April 26 is said to have been born “on the cusp” between the signs Aries and Taurus.

We’ve been using the word “dive” in American English for a run-down bar since the latter half of the 19th century. The term comes from the fact that disreputable taverns were usually located in basements, so one had to figuratively dive into them. I’m a big fan …

56 Company that uses about 1% of the world’s wood supply annually : IKEA

Twitch is a live-streaming platform used primarily by gamers. Folks playing games can broadcast their game play live to an audience.

“SAAB” stands for Svenska Aeroplan AB, which translates into English as Swedish Aeroplane Limited. Although we usually think of SAAB as an auto manufacturer, it is mainly an aircraft manufacturer. If you take small hops in Europe you might find yourself on a SAAB passenger plane. The SAAB automotive division was acquired by General Motors in the year 2000, who then sold it to a Dutch concern in 2010. However, SAAB (automotive) finally went bankrupt in 2011. The assets were acquired in 2012 by NEVS (National Electric Vehicle Sweden), a new company that used the SAAB name on its vehicles for several years.

3 Word that sounds like a plural of 1-Down : APSE

9 1980 black-and-white film that was nominated for Best Picture, with “The” : … ELEPHANT MAN

“The Elephant Man” is a 1980 biopic about Joseph Merrick, a severely deformed man who appeared in a Victorian freak show in London. Merrick is portrayed by John Hurt. Mel Brooks was one of the producers of the film, although his name was left off the credits to avoid audiences anticipating a comedy. “The Elephant Man” is no comedy …

In French, “une biographie” (a biography) recounts “la vie” (the life) of an individual.

“Pro tempore” can be abbreviated to “pro tem” or “p.t.” “Pro tempore” is a Latin phrase that best translates as “for the time being”. It is used to describe a person who is acting for another, usually a superior. The President pro tempore of the US Senate is the person who presides over the Senate in the absence of the Vice President of the US. It has been tradition since 1890 that the president pro tem is the most senior senator in the majority party. The president pro tem ranks highly in the line of succession to the presidency, falling third in line after the Vice President and the Speaker of the House.

St. Teresa of Ávila (also known as St. Teresa of Jesus) was a Carmelite nun living in Spain in the 1500s. She is particularly noted for her writings on Christian meditation and mental prayer.

Juul is a brand of e-cigarette on sale in the US. Cigarette supplier Altria (formerly Philip Morris) purchased a 35% share in manufacturer Juul Labs in 2018.