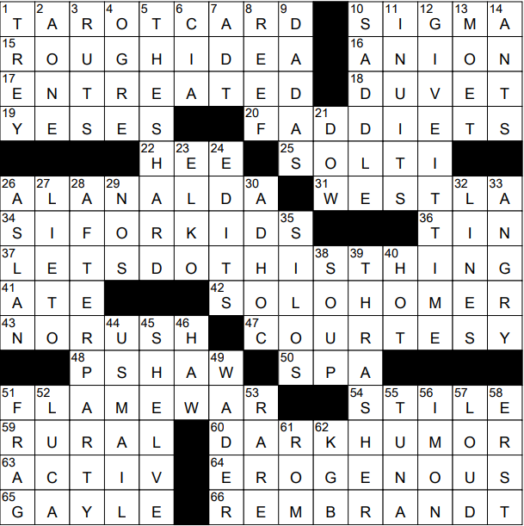 A duvet is a large flat bag that is filled with down feathers or a synthetic substitute that is used as a top cover for a bed. Although a duvet is similar to what is called a “comforter” in the US, there is a difference. A duvet is often has an easily removed cover that is usually laundered at the same time as the bottom sheet and pillowcases. We use them a lot in Europe, and generally without a top sheet due to the ease of laundering.

20 South Beach and others : FAD DIETS

43 Sarcastic remark to a slowpoke : NO RUSH

47 “When restraint and ___ are added to strength, the latter becomes irresistible”: Gandhi : COURTESY

“To flame” is an informal term used in Internet circles and means “to inflame”, to incite anger, to make insulting criticisms or remarks.

59 Like many scenes of the artist Jean-François Millet : RURAL

Jean-François Millet was a French painter of the Barbizon school who is famous for his depictions of peasant farming. I’ve had the privilege of viewing some of his paintings in the Musée d’Orsay in Paris a few times. Millet spent much of his time painting in the countryside surrounding Barbizon, where he lived in France. Millet’s most celebrated work is called “The Gleaners”, which depicts poor women taking advantage of their centuries-old right to remove the bits of grain left in the fields following the harvest.

63 Preceder of many a play’s climax : ACT IV

Country singer Crystal Gayle is perhaps best known for her 1977 hit song “Don’t It Make My Brown Eyes Blue”. She is also well known for the length of hair, which almost reaches the ground as she is standing. Another claim to fame for Ms. Gayle is that she is the younger sister of fellow singer Loretta Lynn.

66 Whom Rodin called “the colossus of art” : REMBRANDT

ADT is a home and small-business security company based in Boca Raton, Florida. The company was founded back in 1874 by Edward Calahan. Calahan invented the stock ticker several years earlier, and ran the Gold and Stock Telegraph Company. Calahan was awoken one morning by the sound of a burglar in his house, and so he decided to develop a telegraph-based security alarm system. The success of the system led to the founding of American District Telegraph, later known as ADT.

Myrmecology is the study of ants. The term “myrmecology” derives from the Greek “myrmex” meaning “ant”.

The Humboldt River in northern Nevada never makes it to the ocean. Rather, it empties into the Humboldt Sink, a dry lake located about 50 miles northeast of Reno. Eventually named for German naturalist Alexander von Humboldt, the river had many names in the past , including “Unknown River”, “Paul’s River”, “Mary’s River”, “Swampy River”, “Barren River” and “Ogden River”.

30 Opposite of standing : AD HOC