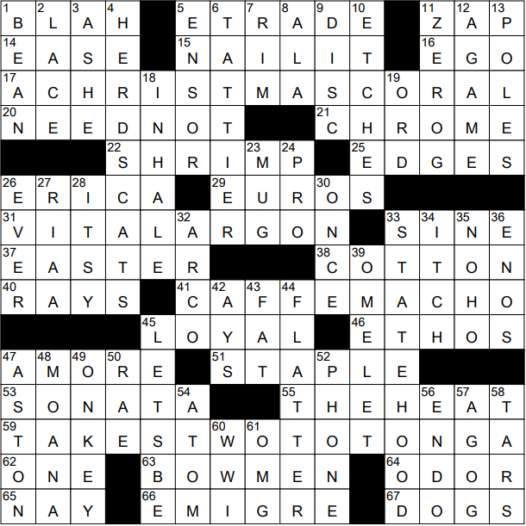 Constructed by: Stephen McCarthy
Edited by: Will Shortz

Today’s Theme (according to Bill): A Too Flip Puzzle

Themed answers are common phrases with letters A and O swapped in one word:

17 Reef deposit hung on the holiday tree? : A CHRISTMAS CORAL (from “A Christmas Carol”)

22 Something an Australian might throw on the barbie : SHRIMP

“Barbie” is a nickname for “barbecue”, especially in Australia. Let’s throw shrimp on the barbie!

The chemical element argon has the symbol Ar. It is a noble gas, and so by definition is relatively nonreactive. The name “argon” comes from the Greek word for “lazy, inactive”. There’s a lot of argon around, as it is the third-most abundant gas in our atmosphere.

What we call “cotton candy” here in the US has some interesting names in the rest of the world. Back in Ireland it’s candyfloss, in France it “barbe à papa” (Dad’s beard), and in Australia it is called fairy floss. “Fairy floss” is actually the original name for cotton candy, a name first used when the confection was introduced at the St. Louis World’s Fair in 1904.

A macho man is one showing pride in his masculinity. “Macho” is a Spanish word for “male animal”.

47 Cause of the moon hitting your eye like a big pizza pie, in song : AMORE

“That’s Amore” is a pop standard written by Harry Warren and Jack Brooks in 1952. “That’s Amore” became the signature song for Dean Martin after he sang it (with some help from Jerry Lewis) in the 1953 comedy film “The Caddy”. “When the moon hits your eye like a big pizza pie, that’s amore …”

The Sonata is one of Hyundai’s most successful models, having been introduced in 1985 and still being sold today. The original model didn’t make it to the North American market as it had problems meeting emission standards. The first Sonatas hit this side of the Pacific in 1988, and were assembled in Bromont, Quebec.

59 Buys tickets for a couple of friends for a Polynesian getaway? : TAKES TWO TO TONGA (from “takes two to tango”)

The term “Polynesia” was coined in 1756 by author Charles de Brosses when he used it to describe all the islands in the Pacific. This usage was later restricted to what we now refer to as a subregion of Oceania.

A mug shot is a photograph of a person’s face, one often taken for a police record.

27 Org. that gives out “gold” but fights pirates : RIAA

The District of Columbia (DC) was established by the Residence Act in 1790. Article One, Section 8 of the US constitution provides for the establishment of a district outside of the states, over which the federal government has authority. The constitution also specifies that the district cannot exceed an area of ten miles square.

35 N.Y.C. neighborhood next to the Bowery : NOHO

Aston Martin is a British car manufacturer founded in 1913 by Lionel Martin. The Aston part of the company name comes from Aston Hill, a famous site for hill-climbing cars that is nearby the original factory. Aston Martin cars are much loved by the British entertainment industry. James Bond was given one in “Goldfinger”, and Michael Caine drove one in the 1969 version of “The Italian Job”. Also, Roger Moore’s character drove a yellow Aston Martin in the seventies television show “The Persuaders!”.

Prior to the outbreak of World War II, what we now know as World War I was referred to as “the World War” or “The Great War”.