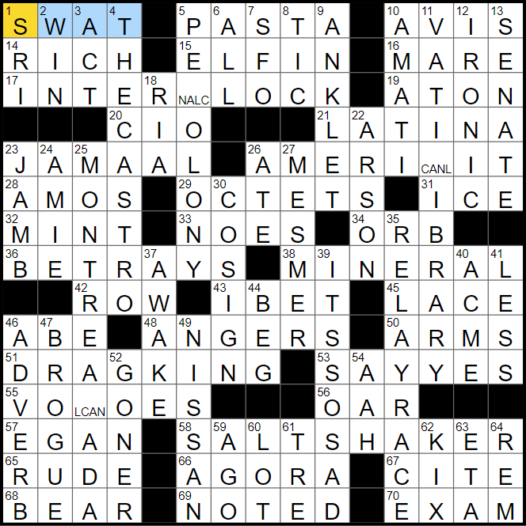 Themed answers each include a rebus square that contains an anagram of “NaCl”:

Dollar Rent A Car was founded in 1965. Chrysler acquired the company in 1990 and merged it with Thrifty Car Rental, which Chrysler had purchased a year earlier.

Someone described as puckish is impish, whimsical. Back in the 1800s, the term “puckish” arose to describe someone merry and mischievous, someone resembling the fairy Puck.

A mare is a large dark area on the moon. “Mare” is the Latin for “sea”. Neil Armstrong and Buzz Aldrin landed on the Mare Tranquillitatis, the Sea of Tranquility.

Ellen Ochoa was the first Hispanic woman in space, serving on a nine-day mission on the space shuttle Discovery in 1993. She spent over 1,000 hours in space over the course of four missions. Ochoa is now the Deputy Director of the Johnson Space Center in Houston, Texas.

26 H.S. course that might have a unit on the Harlem Renaissance : AMERICAN LIT

29 Mendelssohn work in E flat major, and others : OCTETS

Felix Mendelssohn was a German composer who was active in the early Romantic period. Mendelssohn’s most famous works are probably his overtures “A Midsummer Night’s Dream” and “The Hebrides”, as well as his “Italian Symphony” and “Scottish Symphony”.

55 Hawaii is famous for them : VOLCANOES

58 One of a pair at the dinner table … or a hint to this puzzle’s theme : SALT SHAKER

“Ironic” is a 1996 song co-written and recorded by Alanis Morissette. A couple of lines in the song are:

For an awards ceremony in 2004, Morissette changed these lyrics to demonstrate support for same-sex marriage:

The Leaf is an electric car made by Nissan that was introduced in 2010. The model name is an acronym standing for “leading environmentally-friendly affordable car”.

In Spanish, the “tarda” (afternoon) might be a good time for “una siesta” (a nap).

A global positioning system (GPS) might provide one with an estimated time of arrival (ETA).