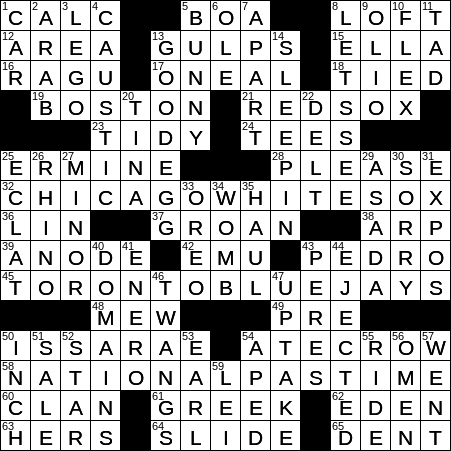 Today’s Theme (according to Bill): Red, White and Blue

Themed answers are the names of teams playing America’s NATIONAL PASTIME, baseball. The team names cited include the words RED, WHITE and BLUE, which are a “patriotic” set of colors here in the US:

1. Course in which to determine a curve’s slope, informally : CALC

Pedro Martinez is a retired baseball pitcher from the Dominican Republic. Martinez won the Cy Young Award three times, and was on the Boston Red Sox team that won the 2004 World Series.

5. Kind of slope for a novice skier : BUNNY

6. Encouragement to a matador : OLE!

The term “torero” is used to describe all bullfighters. The term “matador” is reserved for the bullfighter whose job is to make the final kill. Aptly enough, “matador” is Spanish for “killer”.

“Bob’s Burgers” is a cartoon sitcom that airs on Fox. Not for me …

The word “fetus”, used for an unborn young animal, comes from Latin as one might expect. “Fetus” is the Latin word for the act of hatching or bringing forth a young animal or child. The mistaken spelling “foetus” is seen quite a lot, but there’s no historical basis for adding that “o”.

In Spanish, we start the “año” (year) in “enero” (January) as noted on a “calendario” (calendar).

In Britain, there are five ranks of peer, namely duke, marquess, earl, viscount and baron, in descending order.