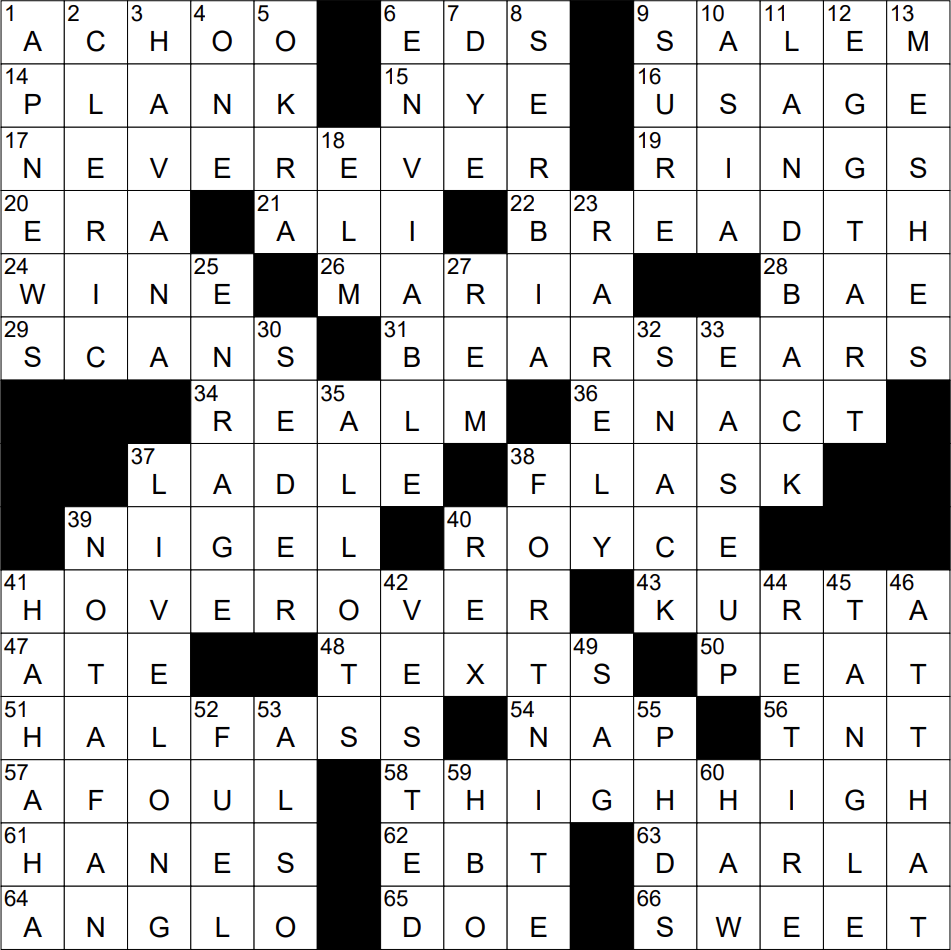 Today’s Theme (according to Bill): Off with the Head

Themed answers each comprise two words, the second of which is the same as the first, but with the first letter removed:

Boxer Muhammad Ali was born Cassius Mercellus Clay Jr. in Lousville, Kentucky in 1942. Clay joined the Nation of Islam in the early sixties, at which point he changed his name to Muhammad Ali. The name he chose translates into “one who is worthy of praise” (Muhammad) and “most high” (Ali).

An emoji is a character found on many cell phones that is much like an emoticon, but is more elaborate. The use of emojis originated in 1997 on mobile phones in Japan, and within a few years spread around the world. “Emoji” is a Japanese word meaning “picture word”.

To be afoul of something is to be in conflict with it. The term “afoul” sounds nautical to me, and indeed it was originally used at sea in the sense of being in a state of entanglement or collision.

61 Fruit of the Loom competitor : HANES

63 To whom Alfalfa wrote “You’re scum between my toes!” : DARLA

The Associated Press (AP) is a news agency based in New York City. AP is a non-profit cooperative that was set up by five New York newspapers in 1846 to share the cost of transmitting news. Nowadays, AP recoups most of its cost by selling news stories and related materials to newspapers all around the world, mostly outside of the US.

Montenegro is a country in Southeastern Europe that once was part of Yugoslavia. “Montenegro” is a historical Italianate translation of “black mountain”.

37 Partner of “prosper” in a Vulcan saying : LIVE LONG

The Vulcan salute is the hand gesture devised and introduced by Leonard Nimoy as Mr. Spock on the original “Star Trek” TV series. The salute is made by raising the hand with the palm forward and with the fingers parted between the middle and ring finger. The gesture is often accompanied with the words “live long and prosper”.

A battle royal is a fight involving many combatants that is fought until one fighter emerges victorious. More recently, the term “battle royale” has become popular following the success of the Japanese film “Battle Royale” released in 2000. There are many, many video games that use the “battle royale” structure.

“By the power vested in me by …” is a line from a traditional wedding ceremony.