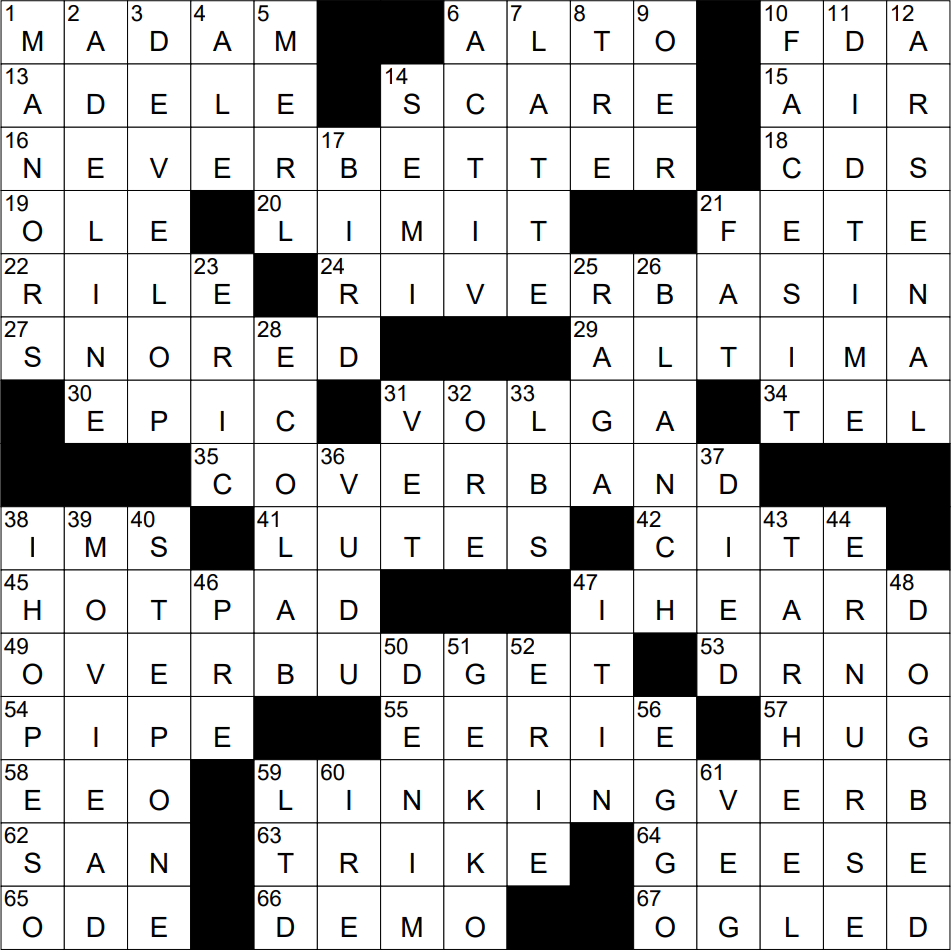 Themed answers each include two words, with “VERB” acting as a hidden LINK between those words:

“Rumour Has It” is a 2011 song co-written and recorded by English singer-songwriter Adele (hence the spelling “Rumour”). The “rumors” referred to in the song concern media gossip about Adele’s breakup with her boyfriend at the time.

The Amazon River of South America is the world’s largest in terms of volume, and accounts for an amazing one-fifth of the world’s total river flow. Perhaps even more amazing is that there are no bridges across the Amazon! There isn’t even one, mainly because the river flows through tropical rainforest, where there are few roads and cities.

The Volga is the longest river in Europe. It is also considered the national river of Russia.

Sturgeons are sometimes classed a primitive fish, meaning that their characteristic features are relatively unchanged when compared to the earliest fossil records. Several species of sturgeon are farmed for their roe, which is made into caviar.

The full name of Israel’s second largest city is Tel Aviv-Yafo. “Tel Aviv” translates into “Spring Mound”, and is a name that was chosen in 1910. Tel Aviv was founded in 1909 as a housing development outside the port city of Jaffa. Tel Aviv and Jaffa merged in 1950.

A mandolin is a stringed instrument in the lute family. There is also a mandola, a similar instrument that is a little larger. In fact, “mandolin” comes from the Italian word for “little mandola”.

“Sweet Adeline” is a marvelous ballad that is most often heard these days sung by barbershop groups. My favorite version of “Sweet Adeline” was sung by the Australian group called the Seekers.

A merl (also “merle”) is often called a blackbird in Europe. The male merl is completely black, with just a yellow beak.

6 When Juliet drinks a sleeping potion that makes her seem dead : ACT IV

William Shakespeare’s “Romeo and Juliet” doesn’t end well for the title characters. Juliet takes a potion as a ruse to fool her parents, to trick them into thinking she is dead. The potion puts her in a death-like coma for 24 hours, after which Juliet plans to awaken and run off with Romeo. Juliet sends a message to Romeo apprising him of the plan, but the message fails to arrive. Romeo hears of Juliet’s “death”, and grief-stricken he takes his own life by drinking poison. Juliet awakens from the coma, only to find her lover dead beside her. She picks up a dagger and commits suicide. Nobody lives happily ever after …

7 Coffee in the milky way? : LATTE

The cooler, the pen, the joint, the slammer, the can … the prison.

Our word “arsenal” comes from the Italian “arzenale”, a work adapted from the Arabic for “workshop”. There was a large wharf in Venice called the Arzenale that became associated with the storage of weapons and ammunition, and this led to our contemporary usage of “arsenal”.

Ecolab is a company that provides mainly cleaning products to the hospitality and foodservice markets. Ecolab was founded in 1923 as Economics Laboratory with the company’s first product being a cleaning solution for carpets in hotels.

“Vet” is an abbreviation for “veterinarian”, a professional who treats animals for disease and injury. The word “veterinary” comes from the Latin “veterinae” meaning “working animals, beasts of burden”.

39 Trailer in a theater : MOVIE AD

A well-known mnemonic for remembering the names of the Great Lakes is HOMES, an acronym standing for Huron, Ontario, Michigan, Erie and Superior. Another mnemonic serving the same purpose is “super heroes must eat oats”.