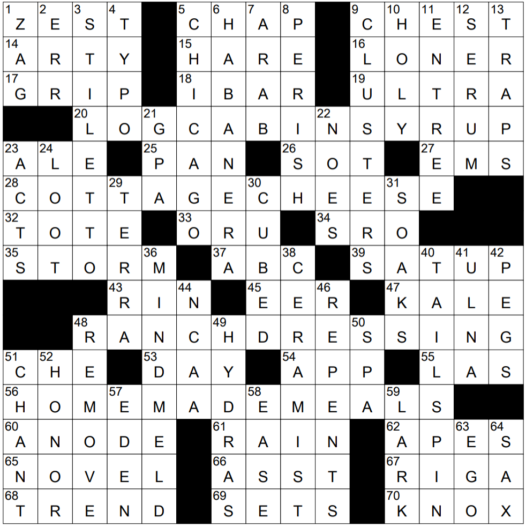 Themed answers are elements of a MEAL, and each starts with a type of HOME hinted at in the corresponding clue:

The March Hare is a character in Lewis Carroll’s “Alice’s Adventures in Wonderland”. It was the March Hare who hosted the tea party near the start of the story, at which we are introduced to another famous character, the Mad Hatter.

Alcoholics Anonymous (AA) was founded in 1935 by Bill Wilson and Dr. Bob Smith in Akron, Ohio. As the organization grew, the guiding principles established by the founders were formatted into a 12-step program that was in place by the 1940s.

The original Rin Tin Tin was a real-life dog, a puppy discovered by a GI in a bombed-out kennel in France during WWI. The soldier named the pup Rin Tin Tin, the same name as a puppet given to American soldiers for luck. On returning to the US, “Rinty” was trained by his owner and was spotted doing tricks by a film producer. Rinty featured in some films, eventually getting his first starring role in 1923 in the silent movie “Where the North Begins”. Legend has it that this first Rin Tin Tin died in the arms of actress Jean Harlow. Not a bad way to go …

47 Vegetable whose name is also slang for “money” : KALE

Ranch dressing has been the best-selling salad dressing in the country since 1992. The recipe was developed by Steve Henson who introduced it in the fifties to guests on his dude ranch, the Hidden Valley Ranch in Northern California. His ranch dressing became so popular that he opened a factory to produce packets of ranch seasoning that could be mixed with mayonnaise and buttermilk. Henson sold the brand for $8 million in 1972.

When jump-starting a car with jumper cables, we are advised to make connections in the following order:

65 Candidate for a Booker Prize : NOVEL

The literary fiction award that we tend to call “the Booker Prize” was inaugurated in 1969 as the Booker-McConnell Prize, and was named for the UK food wholesaler that was the original sponsor. The British investment company Man Group took over sponsorship in 2002, so that the official name of the award is now the Man Booker Prize.

3 Shoe named after a dagger : STILETTO

5 Where Michelle Obama was born : CHICAGO

The dance that we call the “habanera” is known as the “contradanza” in Cuba where it originated. The habanera gained popularity in the 19th century and was the first dance from Cuba to become successful internationally. The name “habanera” is Spanish for “of Havana”.

12 Injection at a hospital : SERUM

Mr. Spock was the first to show us the Vulcan mind meld, in the original “Star Trek” series. Vulcans have the ability to meld with the minds of other Vulcans, and indeed humans, in order to see what’s “going on” in the other individual’s mind.

The bones in the forearm are the radius and ulna. “Ulna” is the Latin word for “elbow”, and “radius” is Latin for “ray”. The humerus (plural “humeri”) is the long bone in the upper arm.

“March Madness” is the name given to the NCAA Men’s Division 1 Basketball Championship (among others), that is held in the spring each year. Another name is “the Big Dance”.

64 Instrument in most jazz combos : SAX