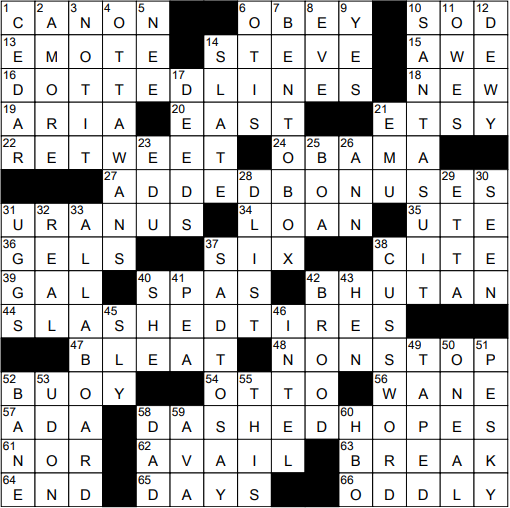 What a clever puzzle for a Monday! Themed clues use keyboard symbols in place of adjectives:

The fundamental body of work of a field of study or art is called its “canon”.

13 Be melodramatic on stage : EMOTE

A melodrama is a play or film that usually pits good against evil, with an obvious hero or heroine vying against an obvious villain. Melodrama has evolved over time, originating in the 18th century as a drama for which there was a musical accompaniment. The term is derived from the Greek “melos” meaning “music” and the French “drame” meaning “drama”.

Actor Steve Carell has achieved great success on both television and in movies. On the small screen, Carell came to prominence on “The Daily Show with Jon Stewart” and then as the lead in the US version of “The Office”. On the big screen, he starred in “The 40-Year-Old Virgin”, “Evan Almighty”. My personal favorite Carell movie is 2007’s ”Dan in Real Life”, in which he stars opposite the wonderful Juliette Binoche.

I have never tweeted in my life, and have no plans to do so (but one should never say “never”!). Twitter is a microblogging service that limits any post sent to just 280 characters. In a sense, it is similar to this blog. Here I send out a post once a day containing information that I think might be useful to folks (thank you for reading). I am way too verbose to make do with just 280 characters!

31 Seventh planet from the sun : URANUS

34 Money for a mortgage : LOAN

Ottawa is the second-largest city in the Province of Ontario (after Toronto) and is the capital city of Canada. The name “Ottawa” comes from an Algonquin word “adawe”, which means “to trade”.

The 1942 song “At Last” was written for the 1941 musical film “Sun Valley Serenade” in which it is performed by Glenn Miller and his orchestra. Etta James recorded a version of “At Last” in 1960, after which it became her signature song.

No one seems to be very certain of the origin of “that’s all she wrote”, meaning “there’s nothing more to be said”. One popular story is that it stems from the unfortunate “Dear John” letters that some soldiers received during WWII.

HBO’s “Game of Thrones” is a fantasy television drama that is adapted from a series of novels by George R. R. Martin titled “A Song of Ice and Fire”. “Game of Thrones” was actually filmed in and around Belfast, Northern Ireland. I binge-watched the show’s first seven seasons, and enjoyed it. There’s no doubt that the production value of “Game of Thrones” is remarkable, but to be honest, I never became riveted by the storyline …