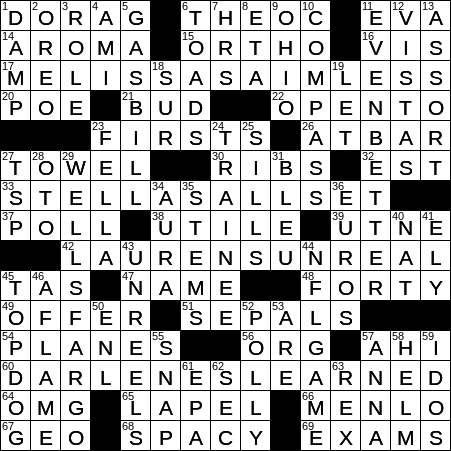 Themed answers are the given names of celebrities in the possessive form, followed by an anagram of that name:

Hip-hoppers might wear do-rags today, but they have been around for centuries. The etymology of “do-rag” is pretty evident: a piece of cloth (rag) to hold a hairstyle (do) in place.

20 Writer after whom the Edgar Award is named : POE

Stella McCartney is an English fashion designer. She is the daughter of musician Paul McCartney (of Beatles fame) and photographer Linda McCartney nee Eastman.

“Hangar” is a French word for “shed”. The French first started using the term to mean “shed for airplanes” in the very early 1900s.

Menlo Park, New Jersey is noted as the home to the laboratory belonging to Thomas Edison (TAE). We also have a pretty well-known Menlo Park out here in California, home to many of the venture capital companies that tend to make a lot of money out of Silicon Valley businesses.

“48 HRS.” is a hilarious 1982 movie starring Eddie Murphy and Nick Nolte. Even though the lead characters play a convict and a cop who team up, “48 HRS.” is often cited as the first of the modern “buddy cop” movies, a precursor to the likes of “Beverly Hills Cop” and “Lethal Weapon”.

9 Home to Xenia and Zanesville, the most populous U.S. cities starting with “X” and “Z” : OHIO

Xenia, Ohio is in effect a suburb of Dayton. The name “Xenia” is the Greek word for “hospitality”. In terms of population, Xenia is the largest city in the US with a name beginning with the letter X.

The city of Zanesville served as the state capital of Ohio from 1810 to 1812. The city was named for Ebenezer Zane who was responsible for the construction of Zane’s Trace, a road from West Virginia to Kentucky that ran through Ohio. Zanesville, Ohio is the most populous city in the US with a name beginning with the letter Z

28 Speaker of a Siouan language : OTO

Back in the mid-1800s, Henry Wells founded an express package delivery service called Wells and Company. Around the same time, William Fargo founded Fargo and Company as a competitor. The two decided to join forces instead of competing, and took on a partner and formed the American Express Company (which is still around today). Fargo and Wells then decided to set up a company in California to provide express delivery and banking services, a company they called Wells Fargo.