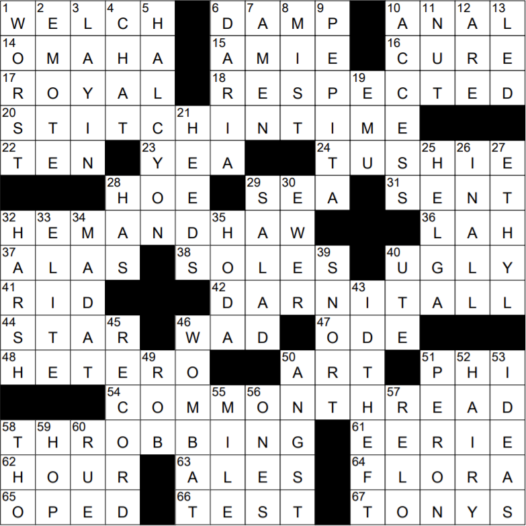 Constructed by: Anne Rowley
Edited by: Will Shortz

Themed answers have in COMMON a starting word associated with THREAD:

14 Nebraska city nicknamed the “Gateway to the West” : OMAHA

Omaha is the largest city in the state of Nebraska. It is located on the Missouri River, about 10 miles north of the mouth of the Platte River. When Nebraska was still a territory Omaha was its capital, but when Nebraska achieved statehood the capital was moved to the city of Lincoln.

22 Number of provinces in Canada : TEN

32 Beat around the bush : HEM AND HAW

To beat around the bush is to prevaricate, to avoid coming to the point. The phrase originated with bird hunting in which locals were employed by the aristocratic hunters to beat the bushes, rousing the birds so that they could be shot as they flew off. So, beating around the bush was a preamble to the slaughter, in a sense a prevarication before getting to the main event.

The prefix “hetero-” comes from the Greek “heteros” meaning “different, other”.

Paul Cézanne was a post-impressionist artist who was born and worked in the beautiful city of Aix-en-Provence in the South of France. Cézanne has the reputation of being the artist who bridged the late 19th century Impressionist movement with the early 20th century Cubist movement. Both Henri Matisse and Pablo Picasso are quoted as saying that Cézanne “is the father of us all”.

“Daria” is an animated television show on MTV. It is a spin-off from the hit series “Beavis and Butthead”.

In Australia, the land outside of urban areas is referred to as the outback or the bush. That said, I think that the term “outback” is sometimes reserved for the more remote parts of the bush.

The Ethyl Corporation produced the controversial anti-knock fuel additive known as Ethyl (tetra-ethyl lead), and we are still with the consequences.

The difference between a premium and regular gasoline is its octane rating. The octane rating is a measure of the resistance of the gasoline to auto-ignition i.e. its resistance to ignition just by virtue of being compressed in the cylinder. This auto-ignition is undesirable as multiple-cylinder engines are designed so that ignition within each cylinder takes place precisely when the plug sparks, and not before. If ignition occurs before the spark is created, the resulting phenomenon is called “knocking”. We sometimes use the adjective “high-octane” to mean “intense, dynamic, high-powered”

A pitcher is a container for liquid that has a handle, mouth and spout. The term “jug” is used for the same container in other English-speaking countries. “Ewer” is an older term describing a pitcher/jug. Today, a ewer is a highly decorative pitcher, often with a base and flared spout.

Wombats are marsupials that are native to Australia. Apparently, wombats are often mocked in their native land, as they are viewed as fat, slow, lazy animals. The “unofficial” mascot of the 2000 Sydney Olympics was “Fatso the Fat-A***ed Wombat”.

55 One of about 93 million between Earth and the sun : MILE