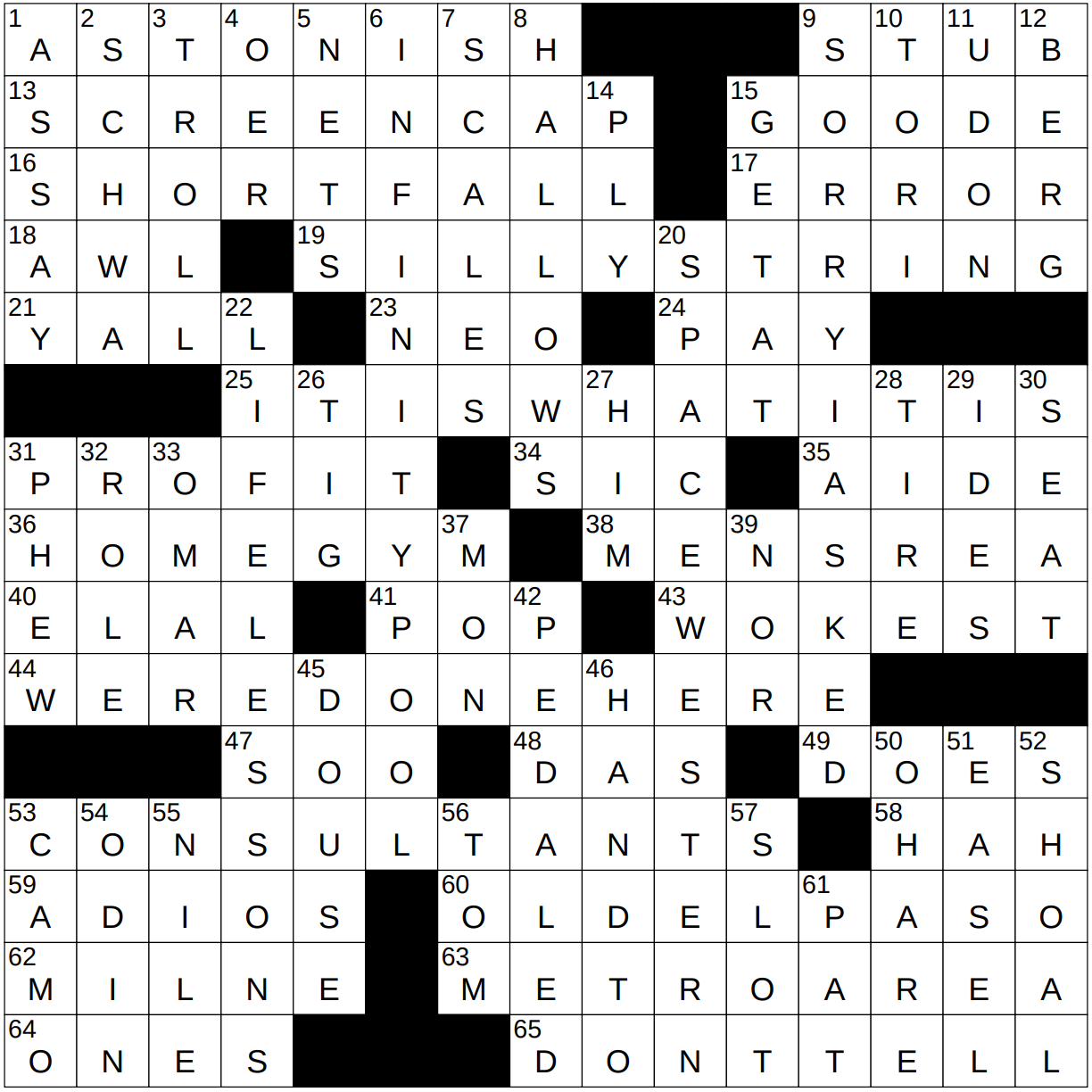 Constructed by: Ada Nicolle
Edited by: Will Shortz

The Wikipedia community uses the term “stub” to denote an article considered too short. A stub is deemed inadequate in that it provides information about a subject that is insufficient for inclusion in an encyclopedia.

13 Part of many a software demo, informally : SCREENCAP

A screenshot (also “screen capture”, “screencap”, “screen grab”) is an image that shows the contents of a computer screen or perhap a still from a TV show.

19 Children’s toy that’s sprayed from a can : SILLY STRING

Silly String is a brand of aerosol string. The “string” exits the aerosol can as a liquid, with the solvent evaporating rapidly in mid-air resulting in a continuous strand. Aerosol string is used as a toy, an application that really annoys me (I’m an old grouch!). However, the military has a use for the product, spraying it over areas where tripwires are suspected. The string falls to the ground if none are present, but gets caught on tripwires that are present without activating any explosive.

25 Tautological words of resignation : IT IS WHAT IT IS

“Tautology” is one of my favorite words. It describes needless repetition, the redundant use of words to convey the same message, perhaps in the same sentence.

36 Room where a Peloton may double as a clothing rack : HOME GYM

Peloton is a New York-based company that manufactures exercise equipment, and also provides fitness classes. Those classes are streamed to touchscreens incorporated into the equipment itself. Participation in the classes requires a subscription.

“Mens rea” is Latin for “guilty mind” and is a central concept in criminal law. The concept is expanded to “actus non facit reum nisi mens sit rea” meaning “the act does not make a person guilty unless the mind be also guilty”. In other words, someone should not be deemed guilty of an act, unless he or she had a “guilty mind”, intended to do wrong.

American Airlines was founded in 1930 through the acquisition of 82 existing small airlines, and initially operated as American Airways. The company name was changed to “American Air Lines” in 1934. Back then, airlines made their profits by carrying the US mail, and American became the first airline to turn a profit on a route that could solely carry passengers. It did so by working with Donald Douglas to develop the DC-3 passenger plane. At that time, American started calling its aircraft “Flagships” and introduced its more wealthy passengers to the first Admirals Club.

Phillipa Soo is an actress and singer who is perhaps best known for portraying Elizabeth Schuyler Hamilton, the title character’s wife in the Broadway production of “Hamilton”.

62 Writer of the line “Did you ever stop to think, and forget to start again?” : MILNE

2 Either side of Alaska? : SCHWA

A schwa is an unstressed and toneless vowel found in a number of languages including English. Examples from our language are the “a” in “about”, the “e” in “taken” and the “i” in pencil.

Originally, the verb “to heckle” meant “to question severely”, and for many years was associated with the public questioning of parliamentary candidates in Scotland. In more recent times, the meaning has evolved into questioning that is less polite and that is directed at stand-up comics.

“Cornflake Girl” is a 1994 song written and recorded by Tori Amos. Amos uses the term “cornflake girl” to describe someone who is apt to hurt you despite being a close friend.

Soba is a thin Japanese noodle made from buckwheat flour. In Japan, the word “soba” tends to describe any thin noodle, in contrast with the thicker noodle called “udon”.

20 Genre for “Cowboy Bebop” and “The Mandalorian” : SPACE WESTERN

“The Mandalorian” is a TV series in the “Star Wars” universe that is set five years after the events in the 1983 film “Return of the Jedi”. The show was created by actor and filmmaker Jon Favreau, and has been well received. The title character is Din Djarin (played by Pedro Pascal), a bounty hunter with a ward named Grogu. Grogu is an infant of the same species as Yoda, and so is referred to by viewers as “Baby Yoda”.

In the most general sense, an ensemble is a group producing a single, harmonious effect. For example, a musical ensemble works together to perform a particular work, with no instrument really dominating the piece. An ensemble cast works on a movie, with the main actors sharing the spotlight relatively equally. An ensemble can also be a complete outfit of clothing and accessories that all work together to provide a harmonized look.

51 Stand for something : EASEL

Nile green is a pale bluish green, and is named for the river.