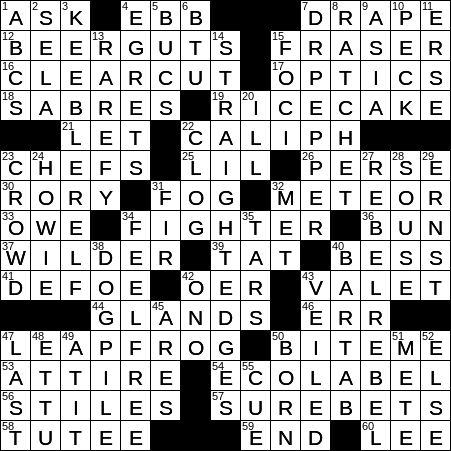 Themed answers are each limited to letters with a STRAIGHT vertical EDGE on the left. As the answers are all in the down-direction, collectively the EDGES make STRAIGHT line oriented in the up-down direction in the grid:

12 They may hang out at pubs : BEER GUTS

They also hang out here at home …

The 2004 Oscar-winning movie “Crash” is a clever piece of work, with several interweaving stories that use a fine cast of characters. Having said that, the fact that “Crash” won the Academy Award in 2005 was very unexpected, as the film had not won any of the other major awards for Best Film that year. The critics’ favorite in 2005 was “Brokeback Mountain”.

36 One of two in Princess Leia’s hairstyle : BUN

“Our Town” is a play by Thornton Wilder that was first performed in 1938. Wilder won a Pulitzer for the work. “Our Town” was actually banned by the Soviet authorities in East Berlin in 1946. Their reasoning was that “the drama was too depressing and could inspire a German suicide wave”.

Harry Truman and Bess Wallace first met when they were very young children at Sunday school. They were friends right through high school and became engaged in 1918, just before Harry went off to France during WWI, and married the next year. Bess Truman never really took to the Washington scene when she became First Lady and stayed out of the limelight as much as she could. Perhaps that contributed to her longevity. Mrs. Truman lived to the age of 97, making her the longest living First Lady in US history.

When Daniel Defoe wrote his marvelous 1719 novel called “Robinson Crusoe”, he was likely thinking of real-life Scottish castaway Alexander Selkirk. Selkirk was marooned and lived alone on the Pacific Island called “Mas a Tierra” off the coast of Chile, for four years. The island was officially renamed in 1966, and is now called Robinson Crusoe Island.

60 Spike of interest in movies? : LEE

A focus (plural “foci”) is a point of convergence, or a center of activity. “Focus” is a Latin word meaning “hearth, fireplace”. The hearth can be a focus of a room.

27 David Bowie hit with the lyric “You’ve torn your dress, your face is a mess” : REBEL REBEL

31 Many a Christmas tree : FIR

Someone described as bellicose is inclined to favor strife or war. The term comes from “bellum”, the Latin word for “war”.