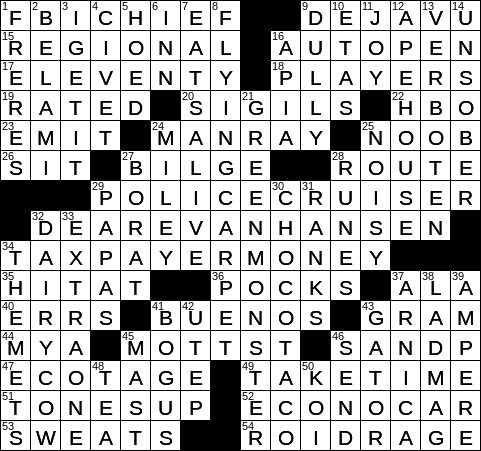 Robert Mueller served as Director of the FBI from 2001 to 2013, serving under Presidents George W. Bush and Barack Obama.

A sigil is a seal or signet. The term comes from the Latin “sigillum” meaning “little sign”. In the world of astrology, a sigil is a symbol that is supposed to have great power.

A police car is often referred to by the slang term “black-and-white”, a reference to the vehicle’s common paint scheme.

Mott Street in Manhattan was probably named after a successful butcher and tavern owner who lived in the area. Mott was known for lending support to those fighting the British during the American Revolution.

1 Partners in some French firms : FRERES

“Frère” is the French word for “brother”.

16 World capital on the island of Upolu : APIA

The left field wall in Fenway Park, the home of the Boston Red Sox baseball team, is the tallest encountered in Major League ballparks. The wall was built that high to prevent viewing of games from outside of the park for free. The height also prevents home runs that would be possible in other ballparks, and so, given its color and reputation, it is called the Green Monster.

27 2006 mockumentary for which the star won a Golden Globe : BORAT

The Holstein Friesian breed of cattle originated in the province of Friesland in the Netherlands and in the German state of Schleswig-Holstein. The breed is very common on dairy farms all over the world, and is the one with the black and white markings. Holstein Friesians are usually referred to as “Holsteins” in North America, and as “Friesians” in Britain and Ireland. Go figure …

34 Side in a Subway Series matchup : THE METS

The term “Subway Series” has been used to describe World Series baseball games when both participating teams are based in New York.

Arnica is in the sunflower family of plants. Supposedly, homeopathic preparations made from Arnica help with bruising and sprains.

A lad mag is a men’s magazine.

42 Sch. near the Mexican border : UTEP