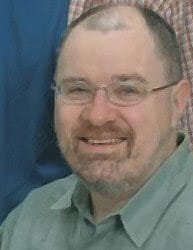 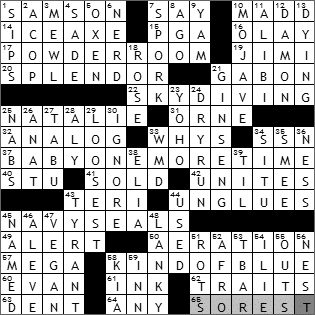 TODAY’S WIKI-EST, AMAZONIAN GOOGLIES
Across
1. Biblical strongman : SAMSON
The name Samson is Arabic for “of the sun”, possibly meaning that Samson was radiant and mighty.

10. Anti-D.U.I. org. : MADD
Candice Lightner lost her 13-year-old to a drink driver in 1980. Soon after, she formed the group Mothers Against Drunk Driving

was developed in South Africa in 1949. When it was introduced internationally, it was given slightly different brand names designed to appeal in the different geographies. In Ireland we know it as Oil of Ulay, for example, and in France it is Oil of Olaz.

as the greatest electrical guitarist in the history of rock music. Hendrix was from Seattle, and had a less than stellar start to his working life. He didn’t finish high school, and fell foul of the law by getting caught in stolen cars, twice. The courts gave him the option of the army or two years in prison. Hendrix chose the former, and soon found himself in the famous 101st Airborne. In the army, his less than disciplined ways helped him (as he would have seen it) because his superiors successfully petitioned to get him discharged after serving only one year of his two-year requirement, just to get him out of their hair.

lies on the west coast of Central Africa. Since it became independent from France in 1960, it has become one of the most prosperous countries on the continent, making use of the abundant natural resources and willing foreign investment.

is of course the daughter of Nat King Cole

. Her mother was Maria Cole, a singer with the Duke Ellington Orchestra. The most famous version of the hit song “Unforgettable

” was released in 1951 by Nat King Cole. In 1991, Natalie Cole recorded a version that was mixed with an earlier 1961 version sung by her father, creating an “unforgettable” father-daughter duet, 26 years after Nat King Cole had passed away.

31. Caen’s river : ORNE
Caen, on the River Orne, lies in the Calvados department of France, in the northwest of the country. Caen is famous for the WWII Battle of Caen

that left the town practically destroyed,. Caen is also the burial place of William the Conqueror

” reached number one in the US charts in 1999. It took her ten years to get another number one. I really don’t care though …

was one of the original four members of the Silver Beatles, along with Lennon, McCartney and Harrison. Sutcliffe apparently came up with name “Beatles” along with John Lennon, as a homage to their hero Buddy Holly who was backed by the “Crickets”. By all reports, Sutcliffe wasn’t a very talented musician, and was more interested in painting. He went with the group to Hamburg, more than once, but he eventually left the Beatles and went back to art school, actually studying for a while at the Hamburg College of Art. In 1962, in Hamburg, he collapsed with blinding headaches. He died in the ambulance on the way to hospital, his death attributed to cerebral paralysis.

most famous role these days is as Susan Meyer in “Desperate Housewives”. I’ve never seen more than a few minutes of that show, so I know Teri Hatcher as a Bond girl, in “Tomorrow Never Dies”.

45. Elite military group : NAVY SEALS
SEAL is an acronym, used by the US Navy’s SEa, Air and Land teams. The SEALs were born out of the Navy’s special warfare groups from WWII, like the Underwater Demolition Teams and the Motor Torpedo Boat Squadrons. The Navy SEAL unit

was established soon after President Kennedy’s speech in which he announced the plan to put a man on the moon, as in the same speech the president allocated $100m of funding to strengthen special operations forces. The Navy used some of this money to set up guerrilla and counter-guerrilla units, which soon became the SEALs.

” was released by Miles Davis in 1959, destined to become his best selling album, and the best selling jazz album of all time.

” was actually a sequel, to Jim Carrey’s “Bruce Almighty

“. “Even Almighty” is a cute enough film, with the lead character mutating into a Noah character, who goes as far as building an ark in his front yard.

Down
1. Nurses, at the bar : SIPS
There’s another of my favorite type of clue, with ambiguous use of words …

3. Whimper like a baby : MEWL
To mewl is to cry weakly, like a baby, with the word being somewhat imitative.

real name is Helen Folasade Adu. Although she was born in Nigeria, she grew up and lives in the UK. She was the lead vocalist for the English group Sade, and adopted the name of the band.

5. Paul Bunyan’s Babe and others : OXEN
The mythological Paul Bunyan had a sidekick called Babe the Blue Ox. Both Bunyan and Babe were gigantic in size.

is the more common name for the utensil that is a hybrid between a spoon and a fork. It is less commonly referred to as a “foon”.

in the southwest is named after the Native American Mohave tribe. Famous locations within the boundaries of the desert, are Death Valley, Las Vegas, Nevada and the ghost town of Calico, California.

12. Friend of Pythias : DAMON
Damon and Pythias were two loyal friends in Greek mythology. Pythias was sentenced to death, and released to settle his affairs after Damon agreed to take his place and assume the death sentence should his friend not return. After a lot of misadventures, the devoted friendship exhibited between the two convinced the magistrates to commute the sentence.

21. Root used in some energy drinks : GINSENG
The word ginseng comes from a Chinese term meaning “man root”. The term is used as the root of ginseng is forked and resembles the legs of a man.

was a whole line of cosmetics and perfumes produced by the House of Dana. The company’s brand names were purchased by a Florida company called Dana Classic Fragrances in 1999.

28. Prince ___ Khan : ALY
Aly Khan was the familiar name used by the media when referring to Prince Ali Solomone Aga Khan, the Pakistani ambassador to the UN from 1958 to 1960. He was also the third husband of actress Rita Hayworth.

“. It’s a fictional tale (I think!) that goes into the whole subject of WMDs (Weapons of Mass Destruction) in Iraq. It’s a great, contemporary, action, war movie.

35. “Peter Pan” pirate : SMEE
In J. M. Barrie’s play and novel about Peter Pan, Smee is one of Captain Hook’s pirates, and his right-hand man. He is described by Barrie as Being “Irish” and “a man who stabbed without offence”. Nice guy!

has been talked about for centuries, but modern interest started in 1933 when a spate of sightings that year were reported. They don’t seem to have stopped since, with photographs really sparking the imagination.

won Oscars for best director in 1948 for “Gentleman’s Agreement

“. In 1999, he was given an Academy Lifetime Achievement Award.

is a anti-inflammatory drug, Naproxen sodium. Tylenol is pain relieving drug, with the active ingredient acetominophen (which we call paracetamol back in Ireland, and outside of America).

was the most entertaining tennis player of the 70s, the days of Jimmy Connors