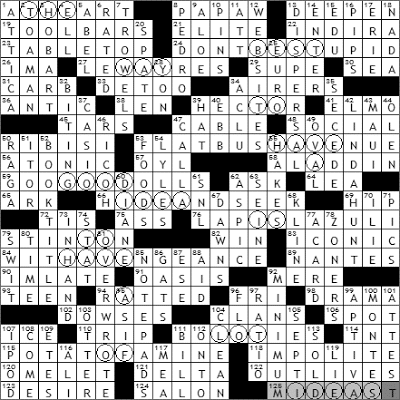 I have deliberately kept this site very simple, but have had requests to add some “lookups” to the daily post. I will try this for a few posts to see what the reaction is.


The Quote: “The best way to have a good idea is to have lots of ideas”
Being a chemist myself by training, I have nothing but admiration for Linus Pauling, perhaps America’s greatest chemist of all time. He is the only person to have individually been awarded two Nobel Prizes (for Chemistry in 1954, and the Peace Prize in 1962). During WWI he worked on military research & development, but after the war he adopted the pacifist views of his wife and led a campaign to ban above-ground nuclear testing, for which he was awarded his Peace Prize.

Across
8: PAPAW
Papaw is a variant of pawpaw. The papaw tree is native to North America, and has a fruit that looks similar to a papaya. Papaw probably gets its name from the word papaya, but pawpaw and papaya are two distinct species.

22: INDIRA (NEHRU GANDHI)
Mrs. Gandhi was India’s only female prime minister to date, and was assassinated while in office in 1984. Born Indira Nehru, she married Feroze Gandhi, a man whose family was unrelated to that of the celebrated Mahatma Gandhi. Indira Gandhi was, however, the daughter of Jawaharial Nehru, India’s longest-serving prime minister. My wife recommends Katherine Frank’s biography of Mrs. Gandhi … not something I have read myself. 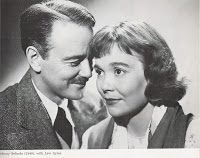 27: LEW AYRES
Lew Ayres did indeed play Dr. Kildare in a series of movies starting in the 1930s, although he came to fame as a star in All Quiet On the Western Front.  Famously, he was a pacifist during WWII and became a member of the Medical Corps (albeit with great difficulty). His private life wasn’t too dull either. He was married three times, with Lola Lane and Ginger Rogers as wives one and two. Actress Jane Wyman apparently left her husband, Ronald Reagan, to be with Lew Ayres, although that relationship did not flourish.

38: LEN (Cariou)
Len Cariou is a Canadian actor, indeed famous for his Broadway portrayal of Sweeney Tood ... I most recognize him from supporting roles in Flags of Our Fathers and Thirteen Days, two great movies. 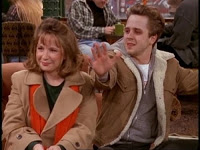 50: Giovanni RIBISI
Ribisi is the guy who played Frank Jr., Phoebe’s brother, on Friends. He also had a supporting role in the wonder Saving Private Ryan, and a starring spot in Lost in Translation, as mentioned in today’s clue. If you’ve ever suffered from jetlag, espeically in a place like Japan, then Lost in Translation starring Bill Murray and Scarlett Johansson, is a must-see movie. I cannot recommend it enough.

59: GOO GOO DOLLS
The Goo Goo Dolls is an American rock band that formed in the late 1980s in Buffalo, NY. Iris, mentioned in today’s clue, is off their hit 1998 album Dizzy Up the Girl. They’re not my cup of tea …

76: LAPIS LAZULI
Lapis lazuli is a blue, semi-precious stone mined mainly in Afghanistan. Lapis Lizuli is Latin for “stone of Lazhward”, referring to the Persian word for the place the stone was mined. Our word “azure”, a shade of blue, has the same root.

96: “The Wild Wild West”
I am huge fan of old movies and television shows. Having grown up in Ireland, I get to enjoy some of the classic shows of 1960s American television today for the very first time. My buddy’s wife gave him a DVD set of the original The Wild Wild West that ran on CBS from 1965 to 1969. He tells me it was meant to be like “James Bond on a horse” and that I will love it. I really do have to check it out!
111: BOLO TIES
I’ve never worn a bolo tie, and was surprised to discover that they are a relatively recent invention. The first one was apparently produced in Wickenburg, AZ in the late 1940s by a silversmith. It takes its name from the boleadora, an Argentine lariat.
115: POTATO FAMINE
No need for me to look this one up! A couple of my ancestors headed this way back around 1850, probably on one of the infamous “coffin ships”. I took Aer Lingus …
120: OMELET
I know this commentary is beginning to sound like one long advertisement, but regardless I have to mention the movie Julie & Julia which just came out on DVD. We saw it at the movie theater, and again the other night here at home. It is hilarious, charming and fascinating, all in one. Meryl Streep, never a favorite of mine, has won me over to here corner with her latest films. I bought my wife both Julia Child’s original French cookbook, and Julie Powell’s latest book (the sequel to Julie & Julia) for Christmas .. don’t tell! Oh, and the omelet reference is because I saw Julia Child on TV the other night cooking dozens of omelets, each taking 20 seconds (!) in the pan.
Down
1: ATTICA
Greece is divided into 13 peripheries, regional administrative divisions. The capital of Greece, Athens, is located in the periphery of Attica. As a completely irrelevant aside, I used to visit Attica, Indana a lot for work when I first came to live in America. I’d like it known that I have never had cause to visit the Attica Prison in New York State …
3: HOBART
Hobart is the capital city of Tasmania, the island off the coast of Australia. Although I have never been in Attica, NY (see above), I do have an ancestor that was shipped from Ireland to Hobart in the days when it was a penal colony in the 1800s. Sailing fans like me would recognize Hobart as the finish line for Sydney Hobart Yacht Race, which starts on December 26th each year.
8: (Pedro) ALMODOVAR
Pedro Almodovar is a very successful Spanish film director, born in a small town in the region of La Mancha (made famous by Don Quixote). I’m afraid I don’t recognize any of his films (I don’t speak Spanish!).
34: ACLU
Hmm … in the limited time available to me, I could not uncover the history of the American Civil Liberty Union’s by-line “because freedom can’t protect itself”. Can anyone shed any light for me? 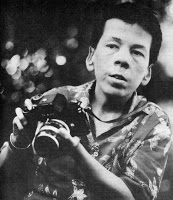 42: LINDA HUNT
Linda Hunt did win her Oscar for playing a man, in Peter Weir’s 1982 masterpiece, The Year of Living Dangerously, set in Indonesia during the attempted coup of 1965. The film stars Mel Gibson and Sigourney Weaver, but it was Hunt that came away with the acting honors. If you’re a PBS listener, you will recognize Linda Hunt as the host to City Arts & Lectures, recorded in my neck of the woods by KQED public radio.
43: MAUI
If you visit Maui, a visit to the Haleakala national park is a must. One section of the park features the spectacular Haleakala Crater, where you would swear you are on the moon. The second part of the park is the Kipahula section, which features the very picturesque pools accessed along the Road to Hana. When we visited (quite a few years ago), the Road to Hana was a tad undeveloped, and rental car companies would not allow you to drive their cars there. Funny enough, the only cars you’d meet on the Road to Hana were rental cars …
44: Robert OLEN Butler
Robert Olen Butler is a American fiction writer. He won a Pulitzer Prize in 1993 for his collection of short stories A Good Scent from a Strange Mountain. I’m afraid I’ve never read his work, and he’s not related …
47: CALLA
The Calla Lily is a common name for a lily of the genus Zantedeschia, even though there is also a Calla lily genus. Now that, that is confusing …
50: RAGA
Raga isn’t really a type of music as such, but has been described as the “tonal framework” in which Indian classical music is composed. Ravi Shankar is perhaps the most famous virtuoso (to us Westerners) from the world of Indian classical music, and is most famous for his sitar playing.

Lyle Waggoner is a veteran of the Carol Burnett Show, and the actor who played the part of Steve Trevor in the Wonder Woman TV series. Before his stint on Wonder Woman, he also worked as a model and has the distinction of being the first centerfold for Playgirl!
60: DIANE (Lane)
Diana Lane is of course a beautiful American film actress, born and raised in New York City. Not so long ago I saw her with Richard Gere in Nights in Rodanthe (and I recommend it). But, my absolute favorite movie of hers is Under the Tuscan Sun  based on the memoir of the same name by Frances Mayes (a writer from San Francisco). It’s lovely, romantic story not without humor, set in the gorgeous Tuscany landscape.
68: Kevin KLINE
Lots of actors in today’s puzzle, huh? Kevin Kline stars in many of my favorite films, like French Kiss (great accent!) and A Fish Called Wanda. In today’s puzzle there is a reference to the romantic comedy In & Out, another favorite. In & Out  is perhaps best remembered for it’s dramatic “interaction” between Kevin Kline and Tom Selleck … if you haven’t seen it yet, I won’t spoil it for you by saying any more!
96: FLO
Florence Jean “Flo” Castleberry was a waitress in the sitcom Alice which aired on CBS in the 70s and 80s. Flo got her own sitcom (called Flo) which had a brief run in the early 80s. I saw a few episodes of Alice, but that’s about it. Oh, and Flo was played by Polly Holiday.