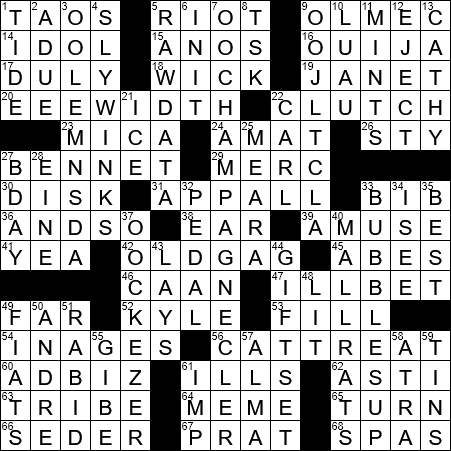 Themed answers are all in the down-direction, and are the names of carbonated beverages. The twist is that the letters O in those names, the “BUBBLES”, have floated UP to the top of the answer:

Janet Jackson is the youngest of the famed Jackson family of musicians. She is a very successful musical artist (she has sold over 100 million records!) but also devotes a lot of time to acting. When she was quite young she appeared on the TV show “Fame”, and in 1993 had her first starring role in a film, namely “Poetic Justice”. She followed that up with a part in “Nutty Professor II” playing opposite Eddie Murphy. As usual, she got to sing on the movie’s soundtrack and produced a number one with the song “Doesn’t Really Matter”. Then there was the 2004 Super Bowl halftime show, and a wardrobe malfunction …

Mica is a silicate mineral. Thin sheets of mica are transparent and are used in place of glass in certain applications. This form of mica is called isinglass, and as it has a better thermal performance than glass it is a great choice for “peepholes’ in boilers and lanterns. Mica is also used in the electronics industry, making use of its unique electrical and thermal insulating properties.

The Mercury brand of car was made by Ford from 1938 until 2011. Mercury was introduced by Henry Ford’s son Edsel Ford. Mercury vehicles were positioned as being more luxurious that the regular Ford models, and more economical than Ford’s high-end Lincoln models.

James Caan is an actor from The Bronx, New York City. He is noted for his appearances in some very big movies such as “The Godfather”, “Misery”, “A Bridge Too Far”, “Rollerball” and more recently “Elf”. Caan is quite the sportsman. He plays golf with an 8 handicap, and is a 6-Dan Black Belt Master of Gosoku Karate.

Sonny Corleone was eldest son of Don Vito Corleone in Mario Puzo’s great novel “The Godfather”. In the movie, Sonny was played by James Caan. Sonny appears as a boy in the movie “The Godfather: Part II”, and is played by director Francis Ford Coppola’s own son, Roman Coppola.

9. Carbonated beverage, spelled as 33-Down might suggest? : OO-JLTCLA (from “Jolt Cola”)

Jolt Cola is a sugary beverage with a whole load of caffeine in it (hence the name “Jolt”).

Lomi-lomi salmon is a salad dish in Hawaiian cuisine that is made using raw salted salmon.

“Cathy” is a comic strip drawn by Cathy Guisewite. The strip was largely based on Guisewite’s own life experiences. For decades, cartoon Cathy was a single woman dealing with food, love, family and work. Cathy married her longtime boyfriend in 2005, and the strip ended its run in 2010 with the revelation that Cathy was expecting a baby girl.

37. Carbonated beverage, spelled as 33-Down might suggest? : OO-CKEZER (from “Coke Zero”)

Even though Coca-Cola Zero is in the category of “diet soda”, the marketing folks at Coca-Cola don’t like its association with the word “diet”. The target market for the beverage is young, adult males, so it is described as “calorie-free” rather than “diet”, the assumption being that males associate “diet” with women. Not in this house …

“My Dinner With Andre” is a rather unusual 1981 film, written by and starring Andre Gregory and Wallace Shawn. The whole film is a conversation between the two actors, although they do play different parts as the film progresses.

Alma College in Alma, Michigan was founded by Michigan Presbyterians in 1886. The school has a Scottish heritage of which it is very proud. Alma has its own Scottish marching band, a Scottish dance troupe and even its own design of tartan.