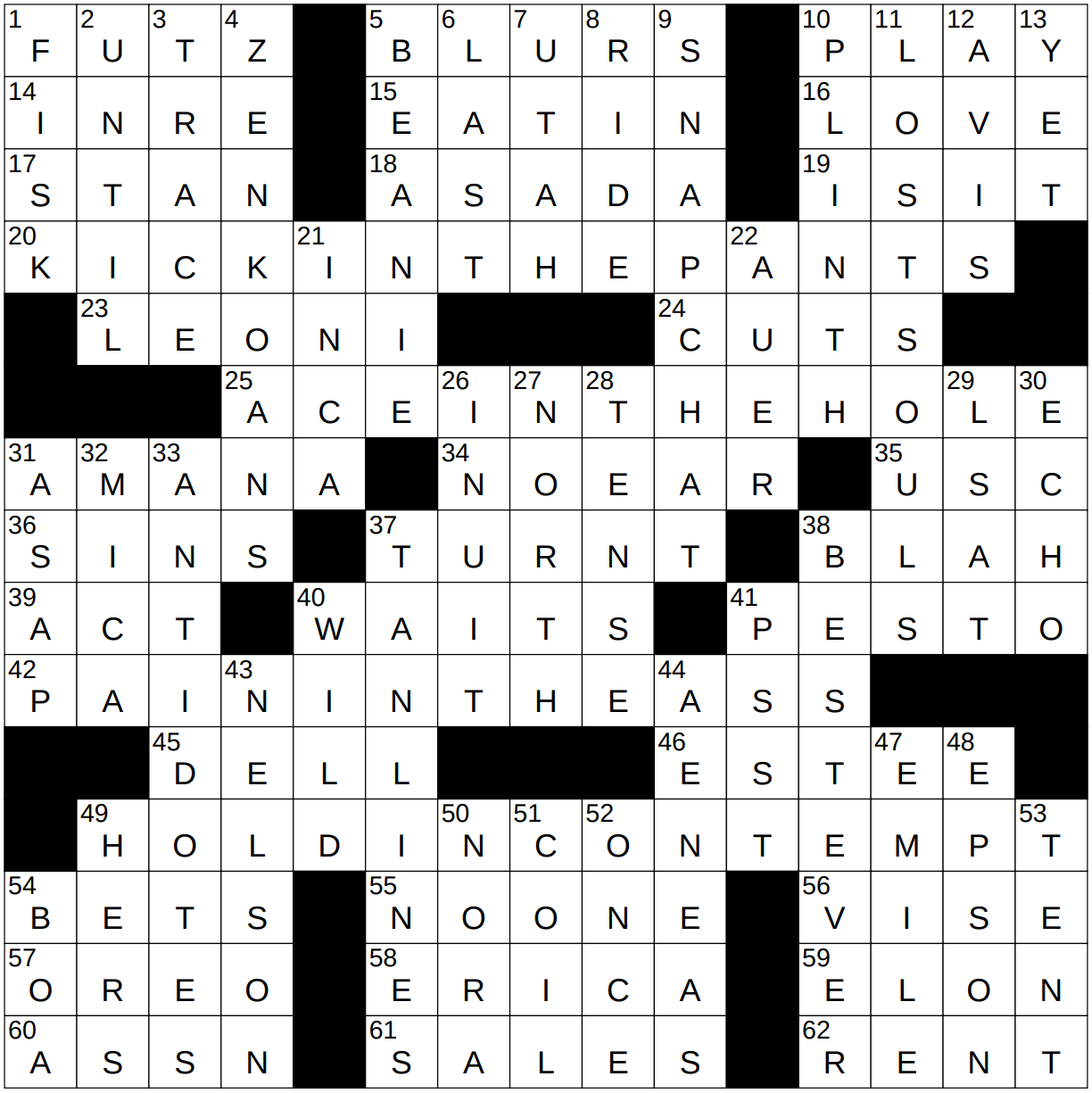 Constructed by: Chase Dittrich & Jeff Chen
Edited by: Will Shortz

Today’s Theme (according to Bill): It’s in the Clue

Themed answers are common phrases in the form X in the Y, where X is a word hidden in the clue, and Y is a synonym of that clue:

Our word “queue”, meaning “waiting line”, comes from French. “Queue” is the French word for “tail”, and the phrase “queue à queue” translates as “one after another” (literally “tail to tail”).

“Stud poker” is the name given to many variants of poker, all of which are characterized by the dealer giving each player a mix of cards face-down and face-up. The cards facing upwards are called “upcards”. The cards facing downwards are called “hole cards”, cards only visible to the individual who holds that particular hand. This gives rise to the phrase “ace in the hole”, a valuable holding that only the player with the ace is aware of.

Whirlpool is a manufacturer of home appliances that was founded as the Upton Machine Company in 1911.

36 The “seven” referenced by the film title “Seven” : SINS

The 1995 film “Seven” is a crime thriller starring Brad Pitt and Morgan Freeman as two detectives tasked with tracking down a serial killer. The bad guy, played by Kevin Spacey, engages in thematic murder, basing each killing on one of the seven deadly sins. I hear that critics and audiences liked this one, but also that it is pretty brutal.

57 Product with a Mini variety : OREO

59 University in a town of the same name : ELON

Elon University School of Law is located in Greensboro, North Carolina. It was established in 2006, and fully accredited by the American Bar Association in 2011.

Fisk University in Nashville, Tennessee was founded in 1866 as the Fisk Free Colored School. It was established soon after the end of the Civil War with the mission of providing education for freedmen.

Zen is a Buddhist school that developed its own tradition in China back in the 7th century AD. “Zen” is a Japanese spelling of the Chinese word “chan”, which in turn derives from the Sanskrit word “dhyana” meaning “meditation”.

Enterprise Rent-A-Car was established in 1957 by Jack. C. Taylor in St. Louis, Missouri, where the company is still headquartered today. The company was originally called Executive Leasing Company. The name was changed in 1962 in honor of the aircraft carrier USS Enterprise, on which Taylor served during WWII.

Pachamama is a goddess worshiped by indigenous peoples in the Andes of South America. “Pachamama” translates best as “Mother World” and embraces the whole universe as opposed to just the Earth.

Emile Hirsch is an actor from Topanga, California. Hirsch’s most famous role was the lead in the 2007 drama “Into the Wild”.

Our word “bazaar”, meaning “market”, comes from the Persian “bazar” that means the same thing.